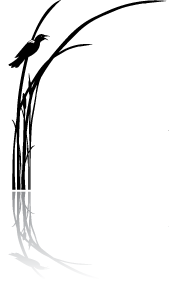 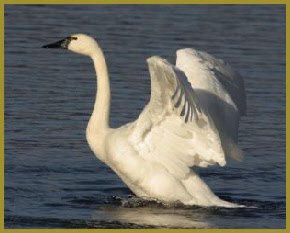 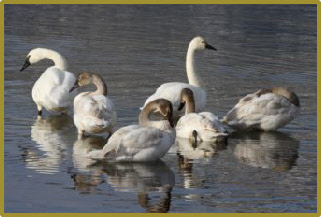 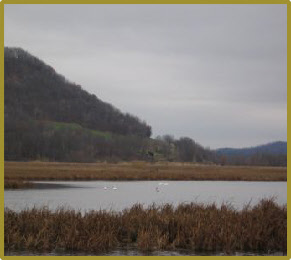 In Whistling Wings, Marcel’s temporary home is loosely based on Rieck’s Lake in Alma, Wisconsin, where I first had the thrill of seeing migrating Tundra Swans in large numbers. If you look closely, you can see a few swans in this picture, but a warm autumn in 2007 delayed their migration. Find out more about tundra swans at Rieck’s Lake at the Alma Tundra Swan Watch.  Also check out Wings Over Alma, a non-profit organization that operates a viewing platform on the Mississippi flyway.

There are two species of swans that are native to North America, Tundra Swans and Trumpeter Swans. Tundra Swans, also called “Whistling Swans” because of the sound of their wings, are smaller and more common than their endangered cousins. The Trumpeter Swan Society has a great web page where you can learn the differences in the appearance, behavior and calls of the various swan species.

Tundra Swans return each year to the same nesting areas in northern Canada and Alaska. Many stop off in large numbers in Minnesota, Wisconsin and Michigan, before continuing to their wintering grounds in the Chesapeake Bay area. Tundra Swans mate for life, but not until they are four or five years old, often “going steady” for a year before breeding. Click here to learn more about their migration routes and nesting habits.

The swans you are likely to see decorating parks and gardens are Eurasian transplants called Mute Swans. They aren’t actually mute, but they don’t say much! These Mute Swans were photographed on the Avon River in Stratford, England.